This history is compiled from Virginia Millert’s collection and the minutes from the Port Carlos Cove’s Minutes Book. We thank Virginia for all of her work.  If anyone has additional information, or a correction please email webmaster@portcarloscove.com .  With your help this project will evolve. 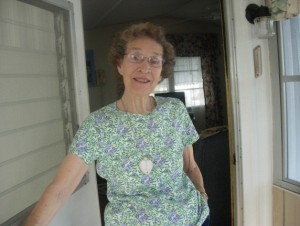 PORT CARLOS COVE, is a mobile home community located at 1802 Main Street, San Carlos Island, Fort Myers Beach, Florida.  The Mobile Horne Cooperative consists of spaces for 155 units, each mobile home space is provided with central utilities, such as water, sewer and electricity. The cooperative owns all the real estate but does not own any of the mobile homes or the personal property placed thereon or in a unit by any member or tenant.

Index of Information
Summary of  Port Carlos Cove by Virginia  Millert
Contains historical documents from “The Beach Bulletin” written by Jeanette Simon of 94 Blackbeard, secretary of the Port Carlos Mobile Colony. These are weekly from December 7, 1971 to April 1972.
Booklet with membership pictures, probably taken in 1972. There are 58 pictures, but all members are listed alphabetically.
The Park newsletter: MATADOR January 1974~ monthly.
An aerial photo of the park and other streets off Main St. 1978 mortgage of Doris Tiedt
Purchase of park by Donald V. Whipp and Carl A. Kreager, 8-14-1978
Letter of Intent- April 28, 1982 to sell San Carlos Cove as others have initiated purchase of park. It is to be offered to residents to buy.
Preliminary lists of committee 1982 ( for purchase)
Newsletter: Jeanette Simons did it for 11 years. Then Nancy Dale
Many letters, financial planning concerning purchase of park.
Planning for a sidewalk along Main Street 1981
Letter announcing the completed purchase of park June 15~ 1982Newspaper clipping Nov. 14. 1982 “Mobile Home Dwellers do it their way” A San Carlos Cove Civic Assn. Newsletter March 1982
Correspondence between Zack Turner. Ken McDono~ lawyers and the park officers concerning lot # 7 where turners rented for 17 years. then were surprised to hear that McDonoughs had ‘bought’ their lot.
Clippings:
Death of Donna Sims, May 4, 1988
Donation to fire station from PCC for S1300. Marianne Sutherland and Dale Fenton- april13, 1988
Some Lists of Residents: Booklet about 1972.1981,1982,1983. undated lists, 1988, 1989, 1995, 1999.2000. (Lists from 2001-2005 are in another book)
1976_Bylaws
76-81 Bylaws
.1981_Bylaws1 copy of the first prospect
us booklet of the Port Carlos Cove Corporation
1983 Rules and Regulation
In our History of Port Carlos Cove, we have several loose leaf notebooks. Some are photo albums, others contain documents including letters between the committee members and previous owners of this area. There are some minutes of meetings in the early 1980s. There is a list of the deed as it passed from owner to owner beginning in 1879.
Some of our Directories are included in these books
One book contains Newsletters form early days through 2008. The officers of the Civic Association and the Directors of the Corporate Board are listed from the beginning through 2008.
Much information and original papers were given to me by Dorothy Wingate and Marianne Sutherland. Please handle the papers and books with care as some are quite fragile
I have taken many small items from old newsletters and from papers like the “Beach Bulletin” They are included mostly for the interest and may not be strict historical fact. Enjoy them.
The first pictures we have of this park were taken of new homes being installed on Galleon Way in 1966. These pictures are in one of the photo albums in the library. # 1 album
Feb 10, 1972 It was called: “Port Carlos Mobile Colony.”
1981, they tried to get a resident park manager appointed thr
ough owner Mr. Kreiger.
Historian, Virginia Millert

Lots one and two of section 19 on mainland. Township 46.

After the purchase of the park, a champagne and cake party was held in “our club house” to celebrate. The name was changed to Port Carlos Cove Civic Association.

A committee of 12 was formed to research ways and means for the present occupants of land owned by Carl Kreager and Donald Whipp of San Carlos Park, to purchase the park outright, so each purchaser will legally own said land and its amenities.

Committee who worked on buying the park:

There were many other residents who worked on the buying out the park, such as: 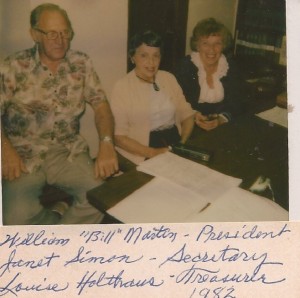 Valentine–ice cream social sold home made ice cream ! Bazaar profit: $1,025.
Art Class with Hugo Hilt 9:00AM Ceramics with Anne Riffle
Luau May 28, 1982. Janet Lindley’s idea. Roasted 3 pigs. 179 attended. New ceiling panels installed in clubhouse.
Crafts with Bill Busfield
Saturday evenings: “Do Your Own Thing”
Renters were notified to either buy their lot or take the consequences: the possibility of raised rent or . being evicted.
coat racks,flowers at the ‘boat’ entrance working street lights

The Newsletter in 1982 was dedicated to Janette Simon who was editor for 11 years. She came to Port Carlos Mobile Colony in 1969 and called the Newsletter: The Beach Bulletin. Other editors of the Newsletter were: Nancy Dale, Ed Campbell, Evelyn Soderburg and Reatha Seaman, Marianne Sutherland and in 2000 or 2001 Rick and Sue Hobot took it over and added color. .

50 volunteers to build the safety walkway. There can be 2 shifts of workers. Volunteers installed the forms and poured concrete for 4″ thick and 8 feet wide. Feb 1983 approximately 1500 linear feet have been built. About 30 volunteers in the area, including other parks, worked on it. The sidewalk project was to be finished by March 20,1983. A ribbon cutting ceremony would be March 23 at 10:00AM. “Decorate Your Bikes” was the order of the day. When the committee was dissolved, the remaining funds of $268 was donated to the rescue squad. There is an entire photo album dedicated to this.

Feb 1983 PCC won 1st place in the Beach Christmas Decorationg Contest. A certificate was given. Additions to the park about 1983:

Card table racks Chair caddies
Mail box stations with roof
A request was made for ideas for a Logo for on the ship.
March 1983 A new bulletin board has been placed near the mail boxes.
A roof over the barbeque pit was built by Frank Gardner, Hod Draper, Ben Rogers, Fred Casadei, Ken McDonough and Curly Gross for less that half of the bids received.
New wooden disc carriers for shuffleboard discs.                                                       ‘
Membership dues were $1.00 per person.
Blood Pressures taken by Donna Sims continues

Voted out a hot tub.
Increased legal meetings to 3 per year.
February: The Sanibel Bridge tickets were available for 50 cents.
Line dancing was available for anyone who wanted to come, Louise Holthaus in charge
There was a George Washington tea and style show, Feb 23.April –Meetings ended with entertainment
Pancake breakfast of March served 175 people.
Extension to pool patio was discussed.
May –Third annual Luau: Marianne Sutherland and Louise Holthaus chaired. 123 attended. First Western Party, a Country Hoedown.
Dec. 1, first Christmas Bazaar.
Dec. =Bylaws have been amended
First Halloween party Oct. 31, 1984
January 1984 Volunteers clearing out the back 40, Bavarian Fest, Pinnacle club, get acquainted teas were some of the year’s activities. They stated:
“OUR ASSOCIATION IS SOUL Y FOR THE PURPOSE OF FUN”

-Jolly Roger Party-Roast Beef dinner.
When the safely sidewalk was completed, remaining funds of $268 were donated to the rescue Squad. It was difficult to get officers even back then!
16 new tables purchased to club house.

Marianne Sutherland was the Historian

A plea for people to attend association meetings .

Monthly fee is now $75 as of March. New Drinking fountain at pool side. Association dues $2.

Hod and Wib Draper moved away and were given a book of pictures of people in the park. These were collected by Helen and Francie Warren. The Drapers gave this book back to the park. This is the first photo album of individuals that the park has.

Discussion began concerning a plan to expand the club house. A new roof and solar system were installed.

Photo album given to Wally Simon (who lived in park 18 years,) was returned to Park. New roof and solar system added to clubhouse

There used to be a nominating committee before the annual meeting. Considering enlarging the club house.

Thelma Clark designed the logo (light house) for this park.

A Question was asked: “Does anyone know who fell into the canal?”

April– association minutes were included in the Newsletter, which was a good idea. Old time movies were shown in the club house, much laughter and enjoyment.

Nov. 1989,55 Alive program scheduled, also CPR Suggestion made for a list of park members to be available 2 new grills were purchased.

? Date bought a golf training machine for about $474, no one used it, got rid of it.

Also we bought a ‘fogger’ to keep away the no-seeums. Also didn’t work well. Got rid of it.

Lawyer suggested that PCCCA incorporate for our protection. $500 fee.

Mae Dressel contacted Pest control people for anyone in the park who wants this service. Fire chief was presented with $1500 from our park

Motion made to form a building fund raising committee for remodeling the club house. Dale Fenton to be in charge.

Motion made to incorporate. It was important to have a tax ID number.

New Historian for the park is Morris Whitmoyer. Presented fire chiefwith $1300.
BURNING OF THE MORTGAGE February 23, 1991 at 8:03 pm

Doris Teidt is comprising a story of major events in the park.

Helen Warren is working on a story of Christmas decoration in the park. Rit was asked for the history of Sports activities.

It was suggested to buy a membership to Sam’s Club for the park purchases. Construction in rec hall to begin in March.

March 12, Beverly Triplehorn is taking over the office immediately as secretary. The Quilt drawing made $1250 for the park

The storage building at the end of the club house was built, donated by Coastal Aluminum.

April 5, 1993 Fire ChiefMc Carthy given $1500. Presentation on Citizens against Crime.

December= after 10 years, Gene Haehnle to resign Chair of Bazaar. Bill Olney and Werner Wieder agreed to do it.

January No interest in Western night or style show or aerobics. Presidents plaque to be placed in the halL

March committee is working on our Prospectus.

April 4, Check to Fire Chief McCarthy for $1600. He said that telephone requests should be ignored as they are scams !

Louise Holthaus placed photo albums in the office of the early days of PCC.

Golf cart donated to park by AI and Barb Beaton.

House numbers were to be painted on driveways. They didn’t last. Filtered water faucet put outside club house. It had only been inside. Canadian flag pole up

They were asking for an historian.

April $18,000 in building fund, for enlargement of rec hall.

Royal palms planted by Bill Dressel. He started them form seed a year ago from trees in his yard. New shuffleboard courts.

Bingo– Florida regulation: Bingo. We Must pay $350 for license fee and so bingo games will be halted until laws changed for small parks. Gloria and Fred LeBlanc in charge.

From the Board: The words “no extra assessment for 3 in a mobile” are deleted. Monthly assessment is $75.

Mortgage is paid off to Doris Tiedt Purchased a computer

Club house renovation not yet completed.

Membership in Sam’s Wholesale Club.( any 6 members can buy membership for $6. Each.)

Building of the addition to the clubhouse 1993

Pleas for people to recycle properly.